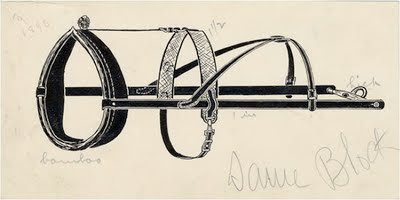 Running Into a New Century

At some point in the latter quarter of the 19th century, someone had a very bright idea.  This unkown dog musher figured out that if he were to hook up his dogs side by side, with harnesses attached to a common single gang line, he could double the number of dogs on his team while keeping the length of the team manageable.

Who or where this new "Alaskan hitch" (sometimes called a "Nome hitch") originated is unknown.  Photographs from the period show this rig most commonly used by early 20th century mail team drivers, while the majority of mushers seem to have held fast to the older single-file rig.  The Alaskan Hitch was introduced to the mushers of the famous World Champion Dog Race at the Northern Manitoba Trapper's Festival (aka "The Pas") in 1920.

A passage from the scrap book of Roy H. Johnson, and appearing on the NMTA website, reads "In the race of 1920, Walter Goyne, who was born in Ruby, Alaska, made history when he came out of the frozen hinterland of Alaska to compete in the early Le Pas Dog Derby.  When Mr. Goyne arrived in The Pas that day many years ago, he discovered that all the local mushers were using an old style toboggan for racing, with their dogs hitched in tandem style.  Goyne brought with him the famous Alaskan dog sled with his dogs hitched in the now famous Alaskan hitch, that is, dogs are two abreast with the leader centering the team in front. Northern Manitobans of that era were quite skeptical of Goyne's sled and "new" hitch and in fact gave him little chance of winning that race of 1920.  But when the race was over, and Goyne had won by an easy margin, the skeptics were forced to eat humble pie.  Today Goyne's Alaskan hitch and sled is being used by all famous mushers in Northern Manitoba, the East and the St. Paul Winter Carnival whose dog races date back to 1889."

The 'new' Alaskan hitch called for some modifications to equipment that had remained essentially unchanged for 200 or more years.  The most glaring changes included an X-shaped breeching that held the harness traces at nearly the correct height to work with a common gang line, and the addition of a singletree (aka 'spreader bar') to prevent the harness from pinching the dog's hips.

The two harnesses I purchased from a neighbor probably originated some time between the first and second world wars.  I've seen harnesses of similar style and materials constructed after World War II, but those invariably incorporated webbing that was apparently war surplus material, dyed olive green or more rarely, khaki.

One of these two harnesses is larger than the other, obviously intended for a somewhat larger dog.  The traces on these harnesses are attached directly to the hane, rather than using a hame-tug attached to an O-ring.  The hames of both collars appears to be bamboo, as illustrated in the 1898 drawing at the top of this article.  The webbing of both harnesses was of white cotton (confirmed by burn test), but are apparently from two different sources or lots, as the thickness and weave pattern is different between them.

The larger of the harnesses is in the best condition. 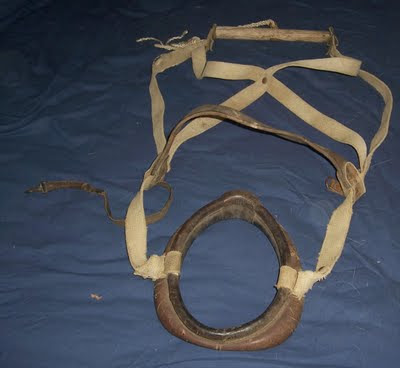 The tab that covers the top of the collar has a stamp, indicating that it was probably made by a professional harness maker, a trade that was rapidly disappearing in the 1920s and 30s.  It is somewhat obscured by age, so I'm not able to glean enough information to determine who that manufacturer may have been. 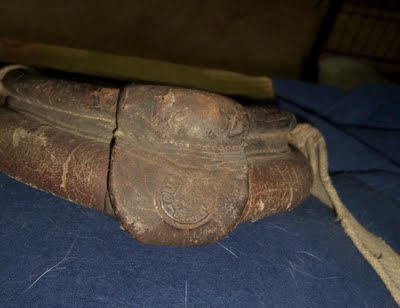 The backband is of pretty thick leather, and the belly band of thinner leather and considerably more narrow than the backband.  The belly band attaches to a small D-ring using a snap hook, which is attached in a manner that shows the opening of the hook was intended to face away from the dog when in use.


The single tree is heavily aged, and is probably original to the harness.  The eye bolt to which the tug going from the harness to the gang-line attached is similar to any modern eye bolt you might purchase in a hardware store, but the square rather than hexagonal nut is evidence of a much earlier origin.  The harness doesn't have any extraneous decoration at all.
I believe the second harness may have been worn by the musher's lead dog.  Historically it was common for mushers to hook up wheel, team and swing dogs side by side, but to have a single leader hooked into the front of the gang-line.  This harness is decorated with two wool yarn poms, reflecting a tradition of decorated standing irons from an earlier century.  The collar of this harness is much more worn than that of the larger. 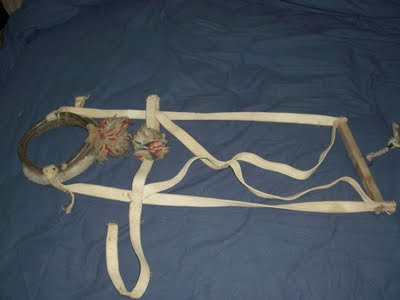 The back-band and belly-band are of one piece of webbing, and it appears that the ends were intentionally opened up, probably in order to salvage the hardware.  The squared wood singletree is probably a replacement for a broken original, and the tug eye appears to be made of stout wire that was clinched back into the wood.
Posted by Swanny at 1:08 PM

Swanny
I'm a 67 year-old large, gregarious, omnivorous, allegedly intelligent primate living in the dog mushing capital of the world. I'm an old-fashioned kind of guy in that I am a historical reenactor and an avid outdoorsman and recreational dog musher enjoying a simple lifestyle in the Last Great Frontier. I spend most of my money on good beer, good dogs and excellent outdoor equipment. All the rest is just wasted on the mortgage, utility bills and so forth.

The Star Dancer team at work

Links to my Favorite Sites